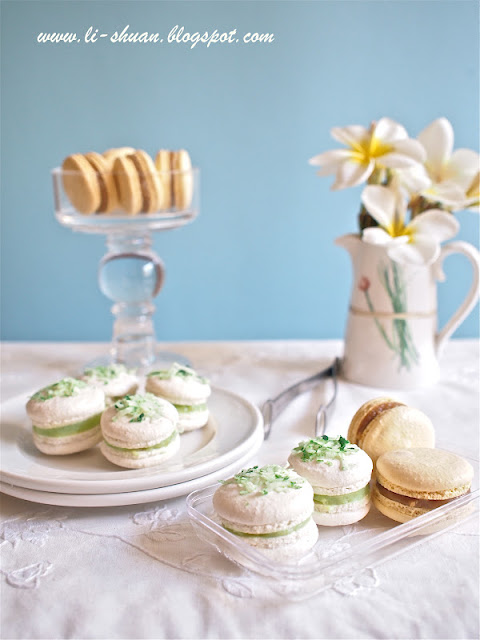 When Zumbo's name is mentioned we will immediately relate to his fancy and playful macarons. Once Zumbo has created a daunting challenge for the competitors in The Australian Master Chef -his tower of terror (macarons towel). I bought Adriano's book when he came to Perth for his book signing last year. My colleague Andrew even  lined up for an hour to get his autograph for me. I was too nervous to make Zumbo's (Australian well known chef) recipe because they involve a lot of details and tricky ingredients.

I am glad that Alan had make macarons as this month Aspiring Bakers theme, I finally had a chance to   flipped  through Zumbo's recipe book again and chose an east meet west theme for my macarons.  Pandan coconut is an eastern delight where as Vegemite is totally Aus. When I first discussed the idea with my friends, they responded with : "What? Vegemite in macarons? iaaakk" Following my heart, I created these two flavoured macarons. Guess what? The results were fantastic. They were extremely delicious. I am so proud to present them to my husband and friends and received 10/10.

My husband and I had a vote for the macarons. At first, I thought I will definitely vote for the pandan coconut one because I hated vegemite but guess what? I voted for vegemite because the salty ganache has layers of flavours which go perfectly with the sweet macarons.

So, which one would you prefer?

p.s. Special thanks to Pam for helping me to plug the frangapani flowers for my photography. She has to use an umbrella hook to reach the tall fragapani tree, as both of us are shorty !! :)

3.) Put the egg white in an electric mixer with a whisk attachment. Put the sugar and water in a saucepan over low heat and stir until sugar dissolved. Use a clean pastry brush to brush down the side of the pan to avoid any crystallisation.

4.) Increase the heat and bring to the boil. Add the food colouring at this stage. Cook the mixture reaches 118C . When it is close to this temperature, start whisking the egg white on medium speed until frothy.

5.) Once sugar syrup reaches the right temperature (118C ), increase the mixer speed to high and slowly pour the syrup in a steady stream down the side of the bowl. Whisk until warm, about 8 minutes.

6.) Add the extra egg whites to the dry ingredients, then add the meringue and use a large spatula to fold them through until combine.

7.) Continue to fold the mixture so it begins to loosen. Working the mixture this way will slightly soften the meringue. When the mixture reaches the stage called macoronage (when the mixture falls slowly off the spatula) it is the right texture.

8.) Transfer mixture to a piping bag with 13mm plain nozzle and pipe into 4 cm diameter rounds.
If you have the correct texture, the macarons will soften again slightly and the tip on top of the macarons will drop leaving a smooth top.

9.) Leave the macarons at room temperature for 30 minutes or until skin forms.

10.) Bake in preheat oven 135C for 16 minutes. Remove from the oven and set aside for 2 minutes then carefully remove on macaron with spatula to check that the base is also cooked and dry. If it is still slightly sticky, return to the oven for another 2-3 minutes. Once macarons come out from the oven, cool them completely on the tray. 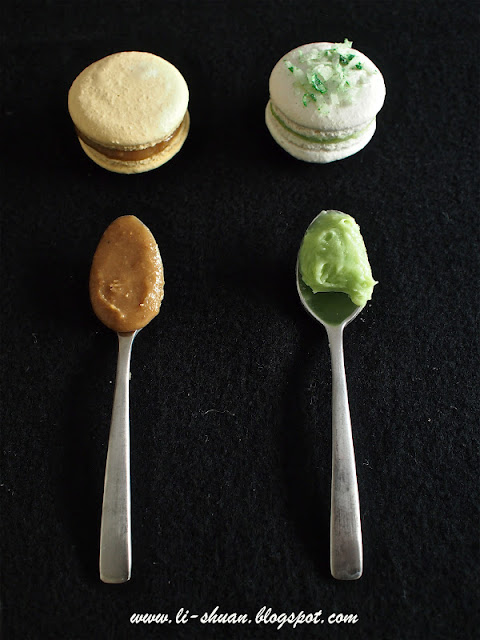 Method:
1.) Put the cream in a saucepan over medium heat and bring to the boil.

2.) Put the chocolate and Vegemite in a bowl. Pour over the hot cream and set aside for 2 minutes.
Stir until the mixture is smooth. Stir in the breadcrumbs. Then cool the mixture to 50C.

Method:
1.) Put the coconut cream, pandan extract, pandan leaves and kaffir lime leaf in a saucepan over medium heat and bring to boil. Turn off the heat and set aside for 20 minute to infuse.

2.) Return coconut cream to boil. Put the chocolate in a bowl. Strain the hot coconut cream over the hot chocolate and set aside for 2 minutes. Stir until the mixture is smooth, then cool it to 50C. 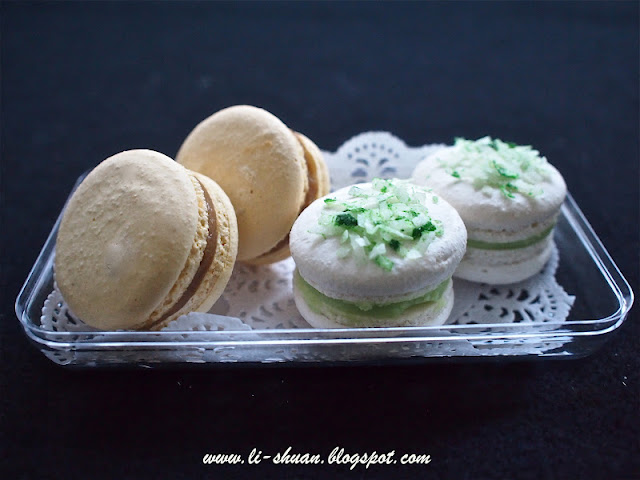 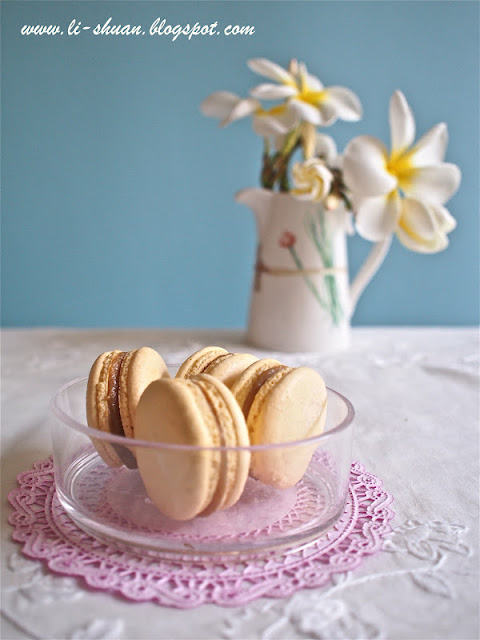 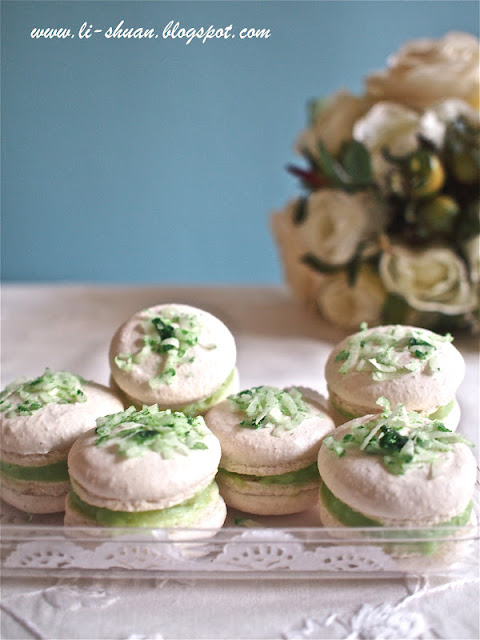